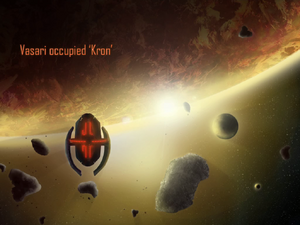 Kron was a Vasari-occupied Volcanic planet with a Viturska Imperial Lab, an experimental transport lab, in orbit 10,000 years before the events of Sins of a Solar Empire.

Not much is known about the Vasari aside from they are on the run from something. The planet Kron is heavily implied that whatever is chasing them originated from this planet.

Kron appeared in the Sins of a Solar Empire intro.

Retrieved from "https://sinsofasolarempire.fandom.com/wiki/Kron?oldid=15379"
Community content is available under CC-BY-SA unless otherwise noted.