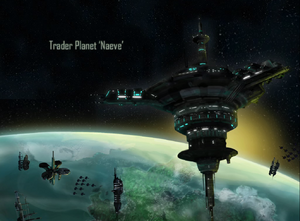 Naeve was a Terran planet and one of the Trader Worlds during the events of Sins of a Solar Empire.

Not much is known about Naeve except that it is a Terran planet under the control of the TEC. It was also one of the first worlds to be hit by the Advent during their initial push into trader space. The fate of the planet is currently unknown.

Behind the scenes Edit

Naeve appeared in the Sins of a Solar Empire intro.

Retrieved from "https://sinsofasolarempire.fandom.com/wiki/Naeve?oldid=18959"
Community content is available under CC-BY-SA unless otherwise noted.