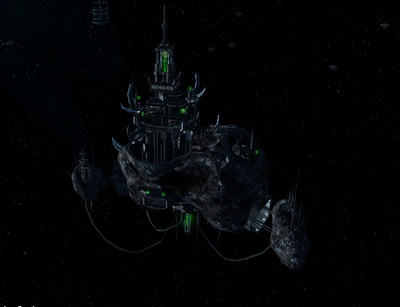 Pirate Bases are the only planets actually owned by the Pirates, and are just modified dead asteroids. Pirate Bases have a default health of 6000, and 5 tactical slots, the pirates do not have to research tactical upgrades since they start out with exactly 19 Pirate Defense Platforms.

Pirate bases do not support population or logistic slots, but they can contain artifacts and all bases have "plundered booty" that allows any conquering empire a constant stream of credits from this planet. Pirates make up for the lack of any shipyards by the fact that new ships phase jump directly to the base every pirate raid, similarly to the Vasari's Returning Armada ability, or the way Rebels attack planets after the TEC research Insurgency. If a pirate raid succeeds in destroying its target it will return home and help defend the base, giving the pirates a theoretically infinite number of ship slots. Virtually all pirate bases are defended by the same number of ships, 14 Corsairs, 6 Cutthroats, 3 Pillagers, 9 Reapers, and one Pirate Rogue. You can tell if a undiscovered planet is a pirate base by zooming in on it, you will see a floating holographic skull and numerous glowing green lights around it. A pirate base cannot send out raids if it is bombed away, and the pirates have no way of recolonizing it. The pirate's defense platforms will become inoperative if the planet is dead also, but the pirate ships will continue to rabidly defend against even the most harmless of intruders. Sometimes the platforms will stay operational until they have nothing left to defend but themselves. Pirate bases are the only planets not entirely contained by a shield when defended with a Shield Generator, the tower on top and the two attached small asteroids will stick out, but this in no way effects the health of the planet. Pirate bases cannot be made into your Home Planet; both the Capital upgrade and the logistics upgrade are invalid for players who have colonized a Pirate Base. From its center to its top the Pirate Base is the tallest habitable planet in the game, if you make a custom map and put the planets too close a Pirate Base can end up inside another planet, and still stick out the northern pole of the planet.

Many players use the pirate base as a defense, counting on the pirates to prevent enemies from attacking their rear flanks. This is true for the AI, but human players will often take a shortcut through the pirate base. The easiest way to do this is to send in a scout first. The pirate defenders will all chase the scout. Now send in your main fleet to quickly run through while the pirates are distracted. This is a very effective way to get the drop on an enemy.

Retrieved from "https://sinsofasolarempire.fandom.com/wiki/Pirate_Base?oldid=18962"
Community content is available under CC-BY-SA unless otherwise noted.