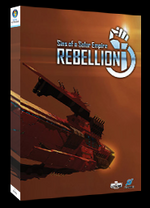 * - Windows XP is not specified or listed under official system requirements. It should still work.Edit

Retrieved from "https://sinsofasolarempire.fandom.com/wiki/Rebellion?oldid=19488"
Community content is available under CC-BY-SA unless otherwise noted.