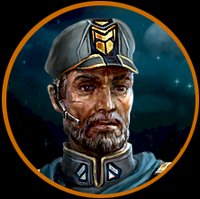 The Trader Emergency Coalition, often abbreviated TEC, was a sort of military government formed from the Trade Order to combat the threat of the Vasari and, when they returned, the Advent.

The history of the TEC began more than 1,000 years ago during the foundation of the Trade Order by economically driven settlers. Established on strict principles of economics and codes of behavior, the Trader Worlds quickly began to expand – making the Trade Order an industrial and commercial juggernaut. However, outside of the Traders' core principles, each member world maintained its own interests, form of government, economic systems and culture.

It was during this early period of the Trade Order that something unique took place which would later reshape the galaxy. During a routine exploratory expedition to recruit new trading partners, emissaries from the Order discovered a dry, desert world orbiting a red giant, whereupon further scans discovered a thriving civilization. Eager to integrate this prosperous civilization into the Trade Order, emissaries established communication with the civilization's leaders from orbit. However, the leaders turned down the membership offer.

Not to be dissuaded, the Trade Order sent several market research teams to the desert planet in order to gather data that could be used to formulate a more enticing strategy for this civilization.

Unfortunately, dreams of integration quickly turned to horror upon landing on the planet. Here the teams discovered a colony of people practicing the most heinous forms of scientific and social deviancy. Invasive cerebral integration technologies, unrestricted biological experimentation, strange forms of collectivism, and wholesale usage of countless neurochemicals were but a few of the transgressions. All these deviancies and more violated the codes and principles of personal freedoms that made up the very foundation of the Trade Order.

Having received only a single, incomplete report of this disturbing information, the emissaries returned to Trader space. Upon their return, their news sent shockwaves throughout the Trader Worlds, who voted overwhelmingly to take control of this desert planet and exile their twisted cousins to the far reaches of space. In time, this exiled civilization was forgotten.

Over the next thousand years, the Trade Order went on in relative peace and prosperity – a golden age for mankind. War became a thing read about only in history books and seen in holo-vids. The rare heated dispute was settled in Trader-sanctioned courts and merchant fleets filled the phase lanes with goods, while the worst thing one could worry about was the occasional raid by bands of marauding pirates in the trade lanes, easily dealt with by local defense fleets.

The Trade Order‘s golden age came to an abrupt end a decade ago with the arrival of the Vasari Empire. With no defenses and constant political infighting between Trade Order representatives and numerous politicians, the Vasari swept the Order's ships aside with ease. Within only a few short months defeat seemed like a real possibility. In a last-ditch effort to turn the tide, the Trade Order sanctioned the creation of the Trader Emergency Coalition to combat the alien threat. The TEC quickly learned to marshal the vast industrial resources of the Trader Worlds towards military production and used their new war engine to finally stall the Vasari attack.

It wasn't until ten years after the Vasari push into Trader Space that a new enemy arrived on the Eastern Fringe. The exiles from the past one-thousand years have returned, calling themselves the Advent. They gained a foothold on Trader territory before the TEC could redirect fleets to halt the Advent advance.

Five years later, the war ground to a stalemate and Coalition forces built mighty Starbases to reinforce their systems on both fronts. However, faced with enemy fortifications as well, the TEC made little to no headway in reclaiming lost territory.

This series of events lasted ten years until the races came to a realization that war was taking its toll on lives and resources. Envoys were sent and diplomacy was given a chance. This was short lived as many within the Coalition, Vasari, and Advent alike felt as though the peace would not last or that it was a waste given the current situation.

In the face of increasing internal tensions, two conflicting philosophies began to develop in the TEC. There were Loyalists who wished to retreat into isolation by fortifying their defenses in hopes the war would finish itself. In opposition to the isolationists were Rebels who wanted vengeance for the atrocities inflicted upon humanity by the invading Advent and Vasari through twenty-five years of brutal war, and were grimly willing to ensure that the TEC emerged victorious by being as ruthless to their alien and deviant enemies as the invaders were during the terrible early invasions.

Compared to their more advanced enemies, the TEC has primitive and makeshift technologies. This is made up for by their means of mass production and heavy firepower. The Coalition specializes in the use of mixed alloys and polymers to strengthen their armor, a strong economy, and mass production and efficiency.

The TEC are masters of industry and efficiency quickly being able to start trade routes in multiple systems, as well as having very cost-effective methods of building their orbital structures. They can inhabit most worlds effectively aside from volcanic worlds. They also have their hands in almost every single economic power and their suppliers regardless of race.

When it comes to mass production the TEC are unmatched. In a time of dire need they will divert a large portion of their factories to military subcontracting. They may also build factories that can hyper-produce ships within their starbases.

Where the other races rely on their offensive capabilities the TEC are masters at fortifying their territories. Strong alloys and polymers ensure a thick defensive hull is within all TEC orbital structures and ships making them very resistant to enemy firepower.

With these powerful defenses they have mastered the art of having very powerful static defenses as well. Their Hangar Bays can be refitted to have anti-strike craft autocannons. Their already potent gauss turrets can be upgraded to sport missile packs and a long-range meson-bolt. And their repair technology is unmatched even by Vasari nano-bots.

And where their Defense may fail, this is made up for by their weaponry. The TEC make use of very low-grade version laser and beam technologies, but their true strength comes from the chemical/nuclear weaponry equipped on many of their standard frigates and bombers. They also make use of auto-cannon payloads to rip through the hull of enemy ships.

The Coalition was created from a prosperous trading society's need for a quickly-developed and powerful military force in the face of an emergency, so their military doctrine is different from the offensive-minded philosophies used by their technologically superior enemies.

Before the war, the Trade Order worlds that would become the TEC were already very industrious. When the Vasari first invaded, these worlds were already an economic machine that merely needed to marshal their vast resources for a massive military buildup. Rapid urban development was pushed amongst all planet types with strong preference for Terran planets, but TEC development policies made sure that all habitable territories, like colonies on Desert and Ice Planets, contributed their fullest to the war effort.

With the need to continue their trade routes, the TEC eventually found ways to put trade ports even on remote, seemingly useless locations (such as Dead Asteroids), making them able to develop trade routes without the need for starbases.

The TEC are an "awakening giant", an economic juggernaut mobilizing for war. They possess massive resource-gathering, trade and construction capabilities, and can cripple other empires' means of production through the use of propaganda. Thanks to the war being fought in former Trader space, the TEC is able to call upon local insurgents to incite uprisings on enemy planets.

The TEC fleet is primarily an assemblage of refitted civilian vessels, with few purpose-built military ships and average strike craft capabilities. However, by the late stages of the war, they are now heavily armed and armored, with TEC fleets often winning the battle of attrition.

Retrieved from "https://sinsofasolarempire.fandom.com/wiki/TEC?oldid=19974"
Community content is available under CC-BY-SA unless otherwise noted.